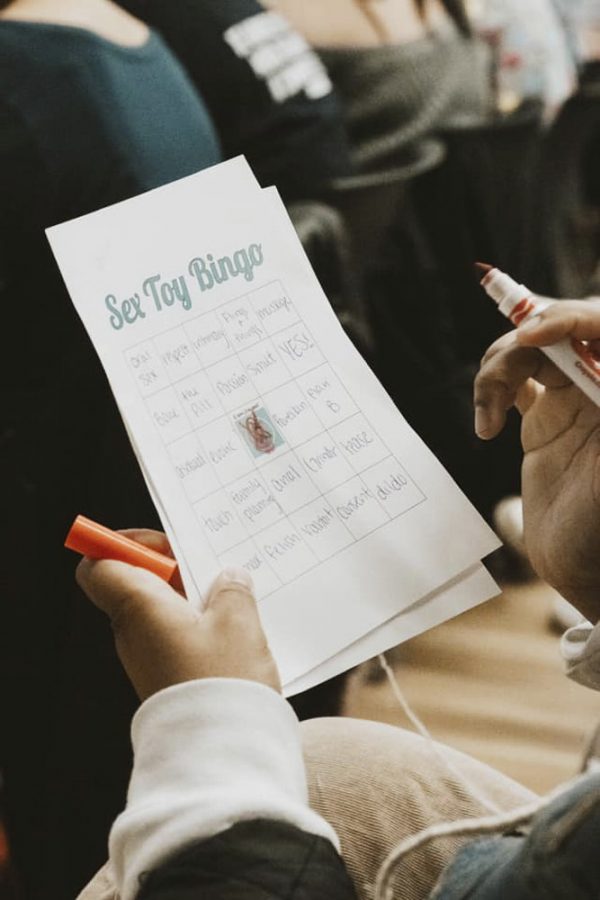 At public universities where there are no restrictions on sex, such as the University of Oregon, sex toys have been given out as prizes at events such as this sex toy bingo night.

“Private school doesn’t mean it puts its nose in my private life.”

Gracie Brown, a junior at Seattle Pacific University, remembers the first time she heard of the university’s no-sex policy as a freshman. Sitting in a large circle with her new floormates during their first floor-meeting, Brown’s jaw dropped when her RA read the contract that all students sign upon enrolling at SPU.

Without really knowing, Brown had agreed to follow a policy she disagreed with. Looking around the circle to gauge the reactions of her new community members, Brown was surprised to find that their expressions of shock were not in response to the rules being read — they were in response to Brown’s own obvious disapproval.

“This is the first time that I learned the kind of shame that you experience when you have any feelings about sex,” Brown said.

“My first lasting impression at SPU was being shamed for being a normal person.”

Many, if not most, college students have sex. Culturally speaking, this generalization is accepted as a fact. Now, put all those hormone-riddled young people together into dorms with minimal non-peer adult supervision and, chances are, some of them will have sex with each other.

This is true at private and public universities alike.

The headline “How to get dick without getting sick” jumps off a page in The Daily, the University of Washington’s student newspaper. Sex toys are given out as awards for winning BINGO cards at a campus event sponsored by the University of Oregon. Meanwhile, students feel shamed and violated by the no-sex policy at SPU.

Section eight of SPU’s Student Standards of Conduct states that disciplinary action will be taken against students who engage in “sexual activity outside of a married relationship.” It also notes that, “cohabitation between two persons in an amorous relationship who are not married to each other is also prohibited.”

This kind of regulation is common among small, private, Christian universities. In contrast, the only reason public universities involve themselves in students’ sex lives is to encourage the use of the many sexual health resources they provide.

Emma Seely is a junior who transferred from SPU to the University of Washington in the fall. The differences between how the UW and SPU approach student sexuality was evident to them immediately. While Seely sees SPU as being unnecessarily involved in patrolling student’s sex lives, they see the UW’s minimal involvement as an effective means of ensuring the well-being of its students.

“There’s plenty of resources they provide just because they know, regardless of your personal feelings on it, people are having sex and it’s better to have a healthy population,” Seely said.

Seely served as the president of Haven, SPU’s LGBTQ+ club, last year and made it an initiative of the club to give members the education and resources that they believe a university should already provide.

“We were like, ‘the school really isn’t doing anything so, as a campus club, we’re going to take that responsibility on,’” they said. “Which we shouldn’t really have to do.”

Seely also emphasized that sexual health resources and education are especially vital for LGBTQ+ students since non-heterosexual sex has an added layer of secrecy and taboo at SPU, leaving these students even more vulnerable if and when they decide to be sexually active. Having experienced this personally, Seely found the UW’s approach to student sexuality to be more effective than SPU’s.

“When people are supporting you and making your own choices about your own body, you’re able to have better boundaries and know what you are personally comfortable with.”

A junior at the University of Oregon, McKenzie Addington’s experiences are similar to Seely’s.

“There are condoms everywhere in the university,” she said of the UO.

“Near most of the public bathrooms, in between the men and the women’s, there’s dental dams, condoms, sometimes even finger cots. And when you go to the health center there’s a huge spread with even more options. Like, every single person’s office in the health center and the counseling center has a little tray of condoms and lube and even cards sometimes with info.”

Addington is a part of the UO Organization Against Sexual Assault and helped host this year’s Sex Toy BINGO night, the club’s annual event which raises awareness and funds for the nonprofit Sexual Assaul Support Services by having students pay to play BINGO and win sex toys as prizes.

Addington was not sexually active before attending college, but when she found a community at the UO that made her feel comfortable and excited to explore her sexuality, Addington did so with readily available knowledge and resources.

“That’s such a natural part of life and going to university and talking with my friends … I think opening up that conversation has been really enlightening and has given me a really good mentality about sex,” she said.

Nevertheless, Addington’s and Seely’s experiences stand in contrast to those of students at SPU.

The university’s Student Standards of Conduct are prefaced on SPU’s website by a statement of intention, claiming that the university’s policies are meant to “promote the intellectual, social, spiritual, and physical well-being of students.”

Many students at SPU feel that these regulations do the exact opposite.

“In any context, even at the college level, having abstinence-only policies is not effective and it’s not helpful and it doesn’t benefit students and their sexual health,” junior Emily Barker said.

During her years at SPU, Barker has noticed a culture of secrecy and shame among students around the topic of sex.

This culture, she noted, creates a feeling of isolation that prevents students who are engaging in sexual activity from having conversations about what healthy relationships look like. Instead, students are left to figure things out on their own, leaving them vulnerable to unsafe practices.

Danika Cole, a senior and Moyer Hall Council President, thinks that this culture of secrecy is encouraged by the fact that Resident Advisors (RAs) are required to report students if they share about their sex lives.

“I’m a huge believer that RAs shouldn’t have to be mandatory reporters,” Cole said.

“I think that would definitely empower students to make their own decisions about their bodies and be able to do so in ways that are really safe and in ways that don’t harness shame or punishment.”

Cole has made it known to the residents on her floor that she is a safe person to talk to about sex. Even though she is not a mandatory reporter, Cole said that, due to the university’s policies, being a point-person for students who want to talk about sex must come from a personal place rather than as a fulfillment of her role as a student leader.

Cole also explained that, even though she is glad she can be there to help students, there is little she can do to provide students with actual resources as long as SPU’s policies remain unchanged.

“It’s putting me in this position where I want to help but I have no way to actually do so other than just being a listening ear.”

Both Barker and Cole believe that a university’s involvement in students’ sex live should be both limited and committed to providing students with sexual health resources, such as contraceptives, education and a more effective process for reporting sexual assault.

Other than being ineffective, the standards set by SPU are insulting to some students.

Although Charlie Lahud-Zahner, who graduated from SPU last quarter, understands having no-sex policies within the dorms, he is offended by the university’s attempts to regulate his personal lifestyle choices off campus.

“It’s a private school, but that doesn’t mean it has to be involved in my private life,” he said. “I’m having sex off campus … and it doesn’t affect anyone other than me and the other person.”

Lahud-Zahner’s frustration with SPU’s Standards of Conduct peaked last year when, against the university’s policy, he cohabited off-campus with his girlfriend. The possibility of having to have a conversation in intimate moments about whether him and his partner, who is not a student at SPU, could get in trouble with the university was enough for Lahud-Zahner to feel violated.

“It doesn’t respect the amount of time and effort that my partner and I put into our relationship,” he said. “It seems SPU … is not respecting my autonomy, treating me like a child and not respecting the intimacy of my relationship.”

Lahud-Zahner also noted that SPU’s policies ignore the fact that cohabitation is often a means for students to be able to afford to live in Seattle and continue attending the university.

It is worth noting that there are many SPU students who do not have any problems with its treatment of student sexuality. But there are also a significant number who have expressed feelings of shame, silencing and intrusion created by the university’s regulation culture.

For Gracie Brown, these implications cut even deeper when considering that the university both employs punishment for normal young adult activity, and does not provide resources to support student health, all in the name of upholding Christian values.

“It kinda seems like an outdated way to think about Christianity in the sense of what it means to be a Christian, or to be a part of a Christian community, is to try to control people: control their bodies and control the way we interact with one another,” Brown said.

“I think this doesn’t really stop people from having sex, it just makes a really shameful culture around having sex. Which is something I learned at SPU.”