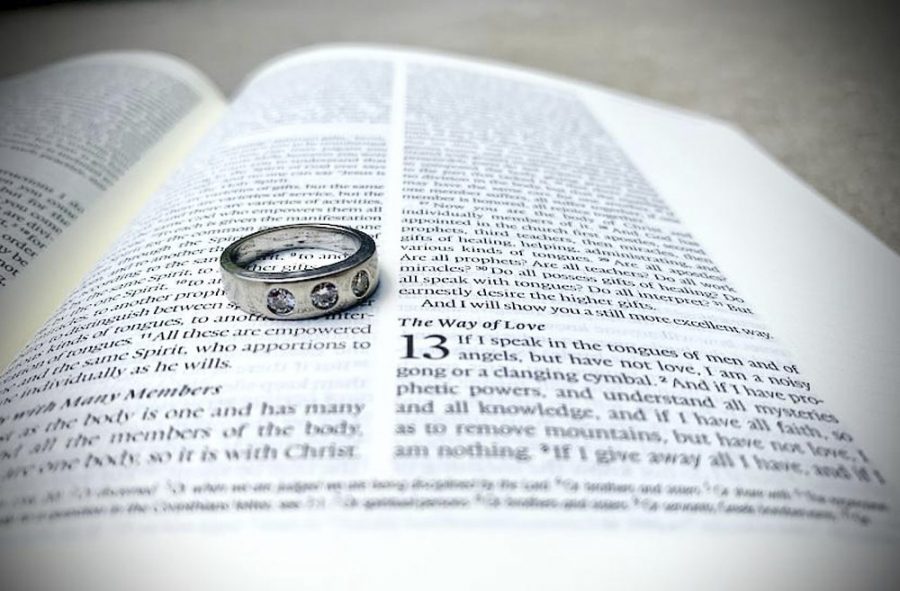 Purity culture grew out of conservative Christian circles in the 1990’s, and many young women received purity rings during their early teenage years.

The purity culture ideology holds that if two people are in love, they should wait until they are married to have sex. The ideology birthed movements such as “True Love Waits” that stemmed from members of the Christian community who promoted abstinence from premarital sexual activity.

The purity culture movement began in the 1990s with parents promoting the biblical ideas surrounding sexual immorality to their children. Teens began to sport purity rings and pledge to not have sex as the movement grew.

But many who were taught to follow this ideology feel that the rhetoric is toxic and has wedged a divide between them, their bodies and God.

Growing up in a traditional Catholic household, junior Jessica Vargas’ parents instilled in her the principle that sex was supposed to be saved for marriage.

“I grew up in a Catholic household that was very ‘go to church every Sunday whether you wanted to or not.’ This was what you had to do,” Vargas said.

“I grew up thinking sex was a bad thing.”

Her parents and grandparents hardly ever talked about sex while growing up because they did not want to promote it. But as Vargas got older and sex started to become more relevant, it became clear that her family was against sex outside of marriage.

Her family wanted her to adhere to purity culture standards by waiting until she was married, but Vargas struggled with this idea because she felt like she was supposed to be ashamed of sex, something she described as being a natural thing.

Vargas wrestled with her place in the church during this time because she felt it did not her support growth.

“My view of God didn’t necessarily change, but it has made me realize that the church itself boxes you in rather than letting you flourish,” Vargas said.

Similarly, junior Kolbe Logan grew up with his parents telling him that sex was a sacred thing that was saved for marriage with one partner.

Although Logan’s parents were pastors, Logan says that he does not necessarily consider himself a Christian. More recently, Logan has been exploring the role of faith in his life and has found that he has many frustrations with the church.

“I wouldn’t necessarily say that [purity culture] is an impediment in me exploring my faith, but it has been one more frustration with the way that Christianity is practiced. Especially since purity culture is ahistorical in Christianity,” Logan said.

Logan finds frustration with the way some Christians treat purity culture as if it has been around since the start of Christianity, when it really has only grown in popularity in the last few decades.

Purity culture tends to promote that sex before marriage is a sin, which has led to many other issues such as shaming.

“I would say that purity culture is toxic. I feel like it’s one of the ways that the church has institutionalized misogyny,” Logan said. “And I think one of the really bad things about it is that it goes back to the idea that Christianity is where our bodies don’t matter and our faith is as much away from the body as possible.”

Sophomore Kiana Hwynn similarly struggles with purity culture because, she says, it can make women feel shameful about their sexuality and their bodies.

“I think where it becomes toxic, in my opinion, is that the whole mentality of purity culture is that it has been pushed onto women and I don’t think the same standards have been held to boys,” Hwynn said. “It kind of creates, for a lot of people, an excuse to slut-shame or feel bad about their sexuality.”

Purity culture promotes saving sex for marriage, but has led to a division between a person’s relationship with their Christian faith, their bodies and others.

Vargas wishes that it had been presented to her as more of a choice. She believes that it should be up to a person what they want to do with their own body.

“It’s okay to believe in saving yourself. But also, just making sure that it’s something that you are choosing to do for yourselves rather than giving in to what other people are making you feel like you’re supposed to do is important,” Vargas said.